When I decided to move to Chicago, a close friend of mine said to me, “there is so much violence there, the black men rape women on the street at gunpoint.”  I couldn’t find the words to remind him that I had been raped twice, in Arizona, by white men without guns.  He said to me, “at least in Arizona, those black men would have been shot, by a man who carried a gun.”  The men who raped me were never hurt, and were never brought to trial.  No armed civilian conveniently appeared to save my innocence.  Had I been armed, I would not have had the foresight to assume that I would have use for my weapon.  Just as they were then, my assailants continue to walk freely among men and women that they may harm.  There was nothing I could do.  There remains no recourse. 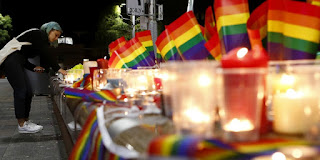 Last Saturday night 50 men and women were murdered by a man with a gun; not simply a gun, but an assault rifle designed for use by the military in times of war.  No war was declared, no terms of surrender offered.  Just an army of one, on an incursion of hate against innocent civilians, against a people who were gathered to celebrate a people’s ability to thrive despite hate.  No courageous civilian rose up to defend the innocents here either.  What kind of person brings a loaded weapon into a busy nightclub, anyway?  I don’t need to tell you, because we have all seen his face plastered across our televisions, computer screens, and newspapers, and I think it is well known that he wasn’t defending anyone.
A man can carry a gun, and a man can kill with a single twitch of a finger, but a man is still fallible, and a man can make the wrong choice.  I was raped twice, by a man; not a man with a gun, but a man with fear and anger.  Had either of those men had a gun, I would not be alive today.  I have never felt so lost, isolated and imperiled as I did while bearing the burden of those two men’s fear and hate.  Rape is a terrible thing.  Murder is a terrible thing.  It is disgusting to know that there are individuals in the world who would have you believe that these acts were warranted by God.  It is nearly impossible to find the courage to stand up and face another day, when these are the words we receive instead of comfort and consolation. 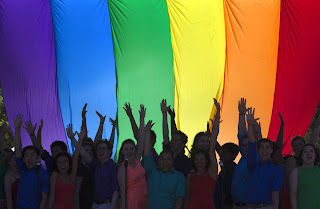 When I think of the tragedy in Orlando, I am reminded that we hang in such a delicate balance.  As minorities of any type, we must continue to show that we will not be victims of terror.  Women, Gays, Lesbians, Transgender, Asians, Latinos, Blacks, Muslims, Jews, and every other underrepresented group of American Citizens must continue to make our voices heard.  But we will be raped, and we will be hurt, and we will be killed, because there will always be someone who believes that they have a God-given right to hand-out sentences for uncommitted crimes.
The crimes against one community are not more heinous than the atrocities delivered upon any other.  A crime is a crime, and if you do not stand opposed to a crime against a human being, you stand against your civil rights:  you stand against humanity, and you stand against yourself!  Instead, stand together with your brothers and sisters in this time of morning and fear.  Celebrate the lives of those who are dear to you, and reach out to those you may not have taken the time to know or understand.
For those who have lost their lives, there remains no further recourse; it may feel as though there is nothing to be done, but we can honor their memory by taking strides to stop these heartbreaking events from continuing to take place.  I live every day, wishing that I did not endure the pain that has been inflicted on me, but I know that it pales in comparison to what befell the men and women who lost their lives to the heinous act in Orlando.

I struggle against the urge to remain locked in my apartment, because I was once told that America is the “land of the free.” Where "freedom rings."
Posted by Unknown at 22:16