I Need The Toilet! by Natasha Ragsdale

It was 6am. The misty morning was whizzing by outside our train and my skinny sleeper bunk on the second of three levels was rocking me just ungently enough to irritate my already irritable bowel. It was time to get up and use the toilet, or so said my guts. The problem? I was in China on an overnight train to the Mongolian border and toilets were almost as inhospitable as Chinese train officials.

I waited in the queue of sleepy, cranky travelers with my personal toilet roll. You rarely get free TP in China, thus you always carry your own. I made a habit of snatching a roll on the rare occasions I stayed at a posh hotel. When I entered the train's metallic shit facility, the word shit was the most obvious descriptive that could ever have come to mind. I swear the place looked like a mental patient got artistic with his own feces. It was worse that that scene from "Trainspotting" about the worst toilet in Scotland. 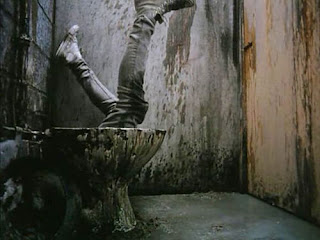 Yet when you have to go, you have to go. The train wobbled and shook and I did my best to find a foot hold, hovering over the pit toilet that emptied onto the tracks, avoiding getting other peoples' butt explosions on my sandals. At one point the train lurched and I nearly ended up in a bath of gross but I held on for dear life and made my way out of the stall feeling a desperate need to apologize for the condition of the space, even though it wasn't my fault. I realized I would never take a clean bathroom for granted again.

I live in Japan which could arguably be the capitol of "Best Public Toilets Ever." We have built in bidets for men and women that lovingly spray "the place where your swimsuit covers" with warm water to clean your bits, music plays when we sit down, and the seats are warmed in cold weather. 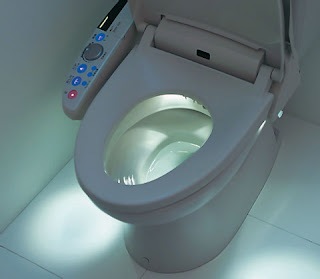 Even at highway truck stops, bathrooms are cleaned every hour and they even sometimes place fresh cut flowers or plants along with nice soaps and air fresheners. I am spoiled. I will never be the same.

The world, in all it's splendor and weirdness is fantastically strange when it comes to the elimination of bodily waste. I remember when I was studying photography as a 13 year old and my dad and I took our annual road trip. I took pictures of every toilet I used because I was inspired by an artist who had done the same with garbage cans on his own road trip. My father thought it was amusing, he's a sociologist after all, so I assume that when he hears that I spent my afternoon talking about toilets with fellow travelers, he will be oddly proud.

So here we are. I am assuming that the average reader is used to a standard western style toilet with a flush mechanism. You know,  a sit down potty. The great porcelain throne. And yet a great part of the world has a different elimintation situation going on.

Stephanie Oye shared a great story with me, that I think is typical to a pit toilet newbie.

"The first time I ever used a squatty potty was in Indonesia. I had already been living there for 3-4 months and had avoided using them. We were on holiday in Gili Meno and had walked down to one end of the island to check out a restaurant we had seen the night before. About 3/4 of the way there I started feeling...not well... in my stomach. By the time we reach the restaurant I *really* needed the toilet. Of course the only facilities out there was a squatty. I grab some tissue out of my purse and decide I had no other choice. The owner leads me back to an outhouse. I go inside. I suddenly remember that I am wearing a one-piece bathing suit. I think, "well, I'm about to get buck naked in this outhouse squatty potty." I turn to lock the door.....and it won't close all the way, let alone lock! By this point I am in serious need to do my business, so I just say eff it and pull down my bathing suit. So here, I am....a fairly big girl, naked with my bathing suit around my ankles, trying not to let it touch the ground, squatting (for the first time, mind you) while precariously holding the door of this outhouse shut with one hand, dealing with a serious case of grumpy guts. I have never been happier to have a bum hose in my life. Made it much easier to cleanse while still holding the door shut (or as shut as I could get it.) Like anything else though, I made it through and it still cracks me up to think about it!" 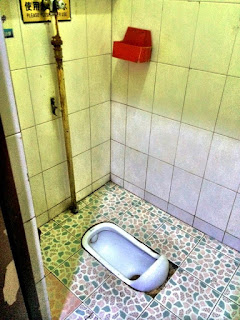 Toilets are funny things in the world. I hadn't experienced a "squatty potty," as Stephanie puts, it until I was 19 and hanging out with some Algerian friends on the outskirts of Paris. I was confused. They even warned me, bless them. I was just happy that I did yoga and had some balance. My husband Jason recently informed me that it took him 3 years to figure out a squat toilet...essentially when I educated him to face the bar and hold on and not actually sit in the hole.

Squat toilets seem to have confounded so many of my friends...except Amanda. Amanda had this to say:

"We were visiting Santorini's main town of Thira. I really had to go and Brian spotted a sign saying "Rest rooms" and pointing to this building. No doors, no stalls and just a hole in the floor. What the hell, I really had to go, so I did. As I was leaving, three women entered. They were jabbering in Texas accents and then I hear one say (very loudly in a Texas accent) "There's no toilet!! What the hell am I supposed to do?" I about ruptured something laughing!"

Yes. Life exists with no running water. In Kenya I was staying in a tiny village and I used rain water to wash my waste down the "hole." There was also an outdoor hole, for more intense situations.
And I have also peed in The White House. When I was 12. It smelled of lilacs...the toilet, not my pee,  and had a lady who handed me terrycloth after I washed my hands. I, too, whilst dating a semi-famous journalist, experienced my first cocaine laced nightclub toilet in London. I was maybe 19. I had never been around drugs like that. There were about 6 skinny women with expensive shoes doing lines right there at the sink. I locked eyes with the bathroom attendant who just shook her head and looked to the floor.  I had never seen drugs. Not really. Funny how things change because many years later my NYC friends and I WERE those coke idiots, if only for a very brief time. The bathrooms of NYC were the social epicenter of our world, and it was fun, until my neighbor Heath Ledger died. And then I was done. That world was not for me. Those bathrooms were not for me.

From all parts of the world you get very personal stories about pees and poos and all the other in-betweens. Obviously. I have IBS so I have to talk more about toilets than most people do in a lifetime. I also TRAVEL with this disease. So toilets are actually a REALLY important aspect of the adventure world, to me.

But exotic local toilet stories don't always have to be gross or painful. 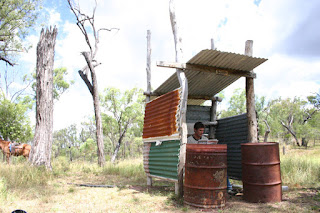 "You've never peed til you've peed in a dunny in the Australian outback! It was the cleanest outdoor toilet I've ever used, I appreciated the brush and cleaner provided to scrub your toilet down after each use."


See! Cleanliness even in the wilds of Australia!

So what does it say about different cultures by the way we look at their elimination process. One could argue that the Japanese have a lot of pride in cleanliness and delicate shyness about their private issues. Rose George once said "What they have done in Japan, is they've brought the toilet out from behind a locked door. They've made it conversational. People go out and upgrade their toilet. They talk about it. They've sanitized it."  Then again this is a place that sells used ladies underwear in vending machines, so I am still at a loss.

I have been all over the United States and seen so many diverse toilets from a beautifully painted yet shabby one on the Hopi reservation in Arizona to the dive at my favorite pizza joint in New York City where you felt you needed a big bat or semiautomatic firearm to fight off all the cockroaches. Perhaps the toilets in the US are as eclectic as the people who live there. I heard Donald Trump has solid gold toilets. Why does this not surprise me?

China was the worst for me. I have always considered toilet paper a basic human right but it seems there few "rights" that people have in China, besides good toilets. They can't drink their water because of lead poisoning and they can barely even breathe their own air without a mask, so it is not surprising that there is no pride put into the elimination of waste.

To quote Rose George again, "Rules governing defecation, hygiene and pollution exist in every culture at every period in history. It may in fact be the foundation of civilization: What is toilet training if not the first attempt to turn a child into an acceptable member of society?"

So then...are we our toilets?

Is the way we take a poo a metaphor for our culture? And because, as the book simply states "Everybody Poops" I wonder.....could going to the bathroom be a thing that could unite the world?

I'll leave you with that thought and this quote from George Carlin: