It is 7:00 am in the morning. My friends and I are prepared to journey to a village called Kakamega. Kakamega is a beautiful village located in western Kenya. In its intestine, is a beautiful momentous spot. What makes the spot historic is the presence of a tall, gargantuan, crying stone. The stone has a head. It also has a shoulder. But it has no neck. It’s crippled. It also has no hands and legs. Perhaps that’s why it cries the whole day long. It has experienced eternal devastation. It was there during the eon when our ancestors were colonized. It was there when our country was headed to the dogs during the bloody post elections violence a few years ago. And that’s why my friends and I decided to go and commune with it. We had decided that we shall name the stone “Cinderella”. 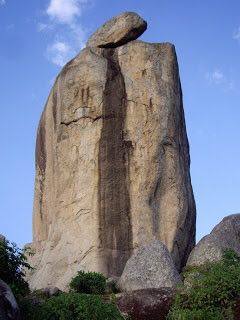 We wanted to wipe her tears and tell her that everything will one day be fine, that we love her with all her disabilities. We wanted her to know that even though her face has old-age wrinkles and her cheeks have shriveled into her cheek bones, she is still as beautiful as a blooming rose flower.
As our journey to Kakamega begins, we carry our tents and foodstuff and the driver of the car we hired comes up with a cool suggestion.
“Guys," he proclaims, "for us to get to have something to remember about our trip to Kakamega, we should pass through Pokot. ”
“Cool," I reply, "what do you love about Pokot?”
“The history…. “
“What about the history?”
“There‘s a certain remand where the first president of our nation was apprehended for a couple of months. See, all the toiletries that he used at the time are still there. Even the last underwear he wore before the day of his release is still there. The last time I saw it, there were residues of some three pubic hairs left. I counted them. Don’t you guys want to see a president’s pubic hair? Come on!”
“Of course we do! What are we waiting for?”
It is 8:00 am. Our journey to Kakamega via Pokot begins. The road has a little bit of mist and fog. We get to a certain zebra crossing. There’s a batty woman who’s urinating on our traffic lane. So we are forced to stop our car until she’s done. No one is really eager to watch her urinate. At this point our minds are thinking of the late president's pubic hair, and Cinderella, the Kakamega crying stone.
After three long hours we arrive at the grasses of Pokot, we are tired. Blood has clotted in my buttocks. There’s a raucous stillness in Pokot. The type of stillness that gives the ticking of a clock a shrill tock at the dead of the night. All shops have been shut. We slow down our car. Peeping through my half closed window, I see a school that looks uninhabited. In front of the school's closed gates is a lonely notebook whose fatigued pages keep on being flipped by the whistling currents of air.

And then, without warning, three gunshots pound on the silence that was there, followed by a woman’s painful scream that pierced our ears.
We are all bewildered. We are unacquainted of what to do. We are incapable of knowing whether the scream and the gunshot we heard came from where we came from, or where we should go.

What’s worse?
We are out of gas.

Our car stops a few steps from a grass thatched hut. We hear a cat meowing. A dog then barks three times. We panic even more. The driver trembles, tears balance in my eyes, my two friends at the backseat breathe like a crowd of women who are about to go into labor. Out of the blue, I feel like I am having a heart attack. A stream of sweat begins to drool profusely from the narrow openings of my arm pits. My heart punches my chest harder, I'm trying to get over the echoes of the gunshots that keep echoing in my ears but I can't. I can't because our vehicle has broken down and I can see droplets of blood and a chopped off hand.


I then feel nauseated. My taste glands produce sour saliva. and at this point, I feel like I am going to pass out. Everyone in the broken down car was holding their hearts in their hands... I could tell it from the tears that balanced in their eyes. 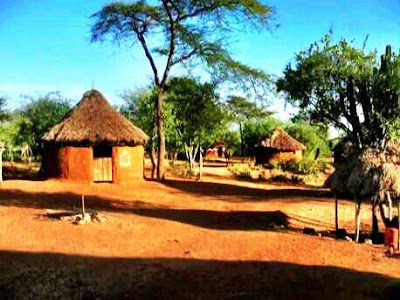 The driver then notices that the narrow path that leads to the grass thatched hut has trails of blood. At this point, I feel like peeing. My bladder is full of the coffee I took before we left. But I’m unable to get out of the car. We hear another gunshot in the air. Now I can feel some droplets of urine salivating to come out of my bladder.
As my pants become wet, a man appears from the grass thatched house. He has stains of blood in his hands and shirt. He looks like he has come from killing somebody, and in fact, he does not mind killing another one. He is in custody of a double edged machete. He wore a bag of arrows and held a big bow firmly in his hands. All signs indicate that he is coming towards our direction. From a distance, we could see a young boy calling, shouting. The bloodied man came towards our direction with the evil determination of a rapist on his face and because we were strangers in the village of Pokot, where two clans were fighting. we did not know where to run. We froze to immobility. I knew it was the end of us. I knew it. 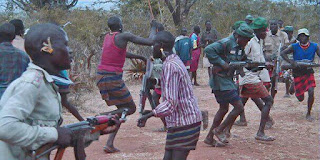 The last thing I remember before losing my consciousness, was a loud scream from my friend at the back seat and the panic of our driver when he desperately tried to restart the car. And then I was gone into nothingness.
There was a smile on everyone’s face when I opened my eyes at the hospital bed where I had been laid for two days. I was surrounded by nurses, my mother and the people we were with me when our car broke down in the village of Pokot. Standing with a calabash of hot peppered soup was the man we saw with blood stains on his hands and torn shirt. He hid us in his hut after I lost my consciousness during my first ever panic attack. We had the assumption that he was coming from killing somebody but that was not the case. He had just slaughtered his goat when his son told him about our broken down car in a war zone area. He narrated the story of our time in Pokot. The inter-clan war that was there, the violence we had seen evidence of was the midnight burglary of livestock - a violence becoming more and more common with the elections upon us.

Our driver and my two friends said that, when I fully pull through, we shall plan another journey to Kakamega. And that once we arrive, we shall tell Cinderella, the crying stone, of the spiteful voyage we navigated through just to wipe the tears that that have been oozing from her eyes perpetually. And I will tell her of my own tears.

SaveSave
Posted by Kenyan Poet at 08:13